September 09, 2016
About a month ago, everyone became hooked / addicted to this new smartphone app called Pokemon Go.

I myself decided to try and installed it in my Oppo phone. By the way, the reason why I got interested in it is because I read John Chow's post about it.

Anyway, because of this app, I started doing and discovering things about my phone. That was the beginning of me starting to avail my cellphone network internet data. I used to avoid and ignore these internet data promos before but after I got hooked on this Pokemon stuff, I had no choice but to ask my officemate who is an expert when it comes to internet data promo.

And kablam! In an instant, you could see me outside looking on the screen of my phone and busy catching Pokemon. Right now, I'm level 15 under Team Mystic (blue). I already caught 62 Pocket Monsters which I will show you later (screenshots will be provided). 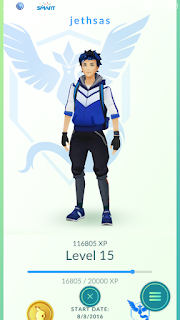 What can I say to this viral app? First of all, I would like to congratulate Niantic Labs (developer) for creating and turning this classic and famous Pokemon into an addicting app. I'm sure they're still celebrating their success as it is a phenomenal worldwide hit and it seems everyone can't get their eyes off of it. 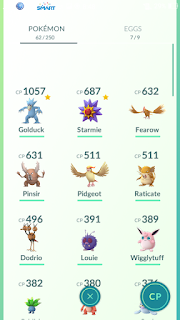 As for the business owners who happen to be assigned as Pokestop in the game (I'm not sure if they personally apply for it to be listed as Pokestop in the game and pay a certain amount or Niantic Labs randomly chose stores to be game Pokestops), I'm sure their sales increase a lot because people who play the said app tend to stay near their area/place and when they get hungry or thirsty, chances are they will buy from them. A strategy indeed! Of course, the beside or next stores will benefit from this too. 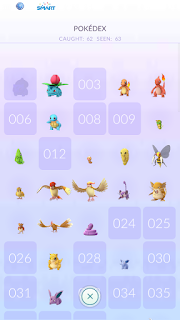 And as for me, since I love business and earning money on the side, I think it can help me to talk and have a bond with other co-gamers as well. Because of that, the scope of people I know become huge and that is a good sign. Also, I can sell cellphone loads to my friends or even to those new acquaintances of mine (since I do have a loading business) for them to continuously play Pokemon Go by subscribing to internet data promo. I actually tried the GoSurf99 of Globe which gives me a 200Mb for a month. That is too much for me because I actually had not consumed it all until it expired. Today is the day my internet data promo came to an end and if I'm not mistaken, I still have 100 or less Mb remaining but that is okay because I enjoyed using it while playing Pokemon Go, surfing the net and browsing Facebook.

That's it! I hope you find this post entertaining and if you happen to be a player as well, kindly let me know through the comment below. I'd like to hear it from you and your experiences with it.

Popular posts from this blog

Learn How To Make Money Online

January 17, 2014
I'm sure you type this phrase in Google, Yahoo and Bing many times. That's why I list here some of my ways to make money online. Start making blog or a simple site regardless if it's free or not Study what Adsense is all about since it's one of the platforms where you can earn money If you have extra money, you should consider getting a professional domain that is to your preference and liking Write useful, unique and exciting content Promote your work using sites you're already a member of (Facebook, Twitter and Google+) Find another ways to monetize your site like text-link ads (I recommend Infolinks or Kontera as I already tried it) And last but not the least, being affiliate marketer and promote products that are aligned to the niche of your site or blog. It's not easy to make money online but if you're determined to make it happen, you will do everything. You will try stuff like SEO (Search Engine Optimization) and study all aspects of inte
6 comments
Click here to continue reading

June 07, 2017
Actually, this stuff I am about to share can be good or bad. It depends on where you get influence from. If the influence can help you achieve your goals, then that is good and vice versa if it can only lead you to misfortune. Anyway, I would like to put here the paragraph I read somewhere. I hope it makes sense to you. Avoid sticking to people who have hobbies of collecting stuff which are too much expensive. In the end, you'll be like them through the influence or the process.
Post a Comment
Click here to continue reading

Did You Start Your 52-Week Money Challenge?

April 14, 2017
Early of this year (January 2017) , I stumbled upon this weird challenge, the 52-week money challenge . The first time I got introduced to it, I became confused because I couldn't understand how it worked. Anyway, the idea of saving money from your salary or business weekly is a good idea but the challenge is you will add the original amount of money to the previous week's money every week.
Post a Comment
Click here to continue reading